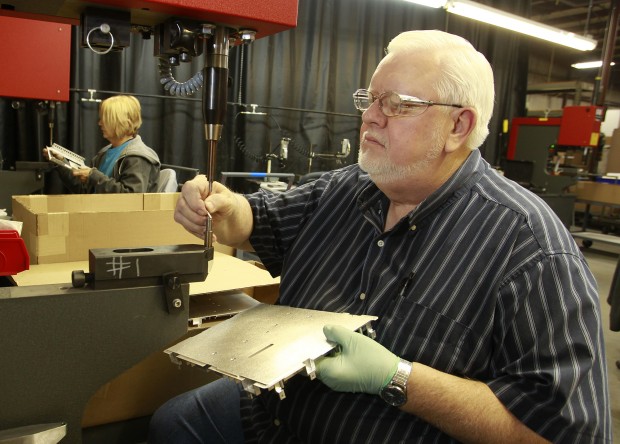 INDEPENDENCE, Iowa — Every company has its own history; Geater Machining and Manufacturing Co., which is celebrating its 50th anniversary in business, is no exception.

But the Independence-based company also has a role in world history, according to Nate Clayberg, director of the Buchanan County Economic Development Commission.

When Osama Bin Laden was killed May 2, 2011 by a U.S. special operations military unit, Independence-based Geater played a part — or, literally, supplied a key part — in the job, Clayberg said.

“There’s a piece of communications equipment developed by Rockwell Collins on the helicopter (used in the operation) that killed bin Laden that was manufactured in Independence (at Geater),” Clalyberg said.

That bit of information came up in discussions with CEO Jerry Bitterman about how to attract workers to the company, Clayberg said.

“You try to talk about the products you make and where it’s going,” Clayberg said. “That’s where some of those discussions came out of the global manufacturing reach Independence has.”

The role in history, perhaps, would come as no surprise, since Geater numbers among its base of customers Rockwell Collins, Crystal, Meggit, Woodward, Astronautics, General Dynamics, and Northrup Grumman.

Growth has been steady over the years, company officials say.

Duane Geater launched the company in August 1962 in the old Manual Training Shop in Independence and brought in one employee. Within two years, there were 10 workers.

On Jan. 1, 1964, Geater incorporated the business and created Geater Machining Co., and in November 1964, it established its manufacturing division for the production of electronic controls, small assembly and sheet metal work.

In July of 1965 Geater purchased a building located at 901 3rd Ave. SE, which was formerly owned by Micro Switch. The building was 12,000 square feet, and in just over a year the company grew to 30 employees.

The company is one of the largest manufacturers in Buchanan County, Clayberg said.

More growth is coming, according to Bitterman, who started with the company in 1986, rose through the ranks to become CEO in 2004 and also is a minority owner.

“We’re adding 27,000 square feet of manufacturing space and, over the next three years, will be adding 11 full-time jobs,” Bitterman said, adding that the expansion represents about $4.3 million in capital investment. Some of that is coming from the state of Iowa through tax credits.

The additional space, which will accommodate manufacturing and office space, will open this year, Bitterman said.

In spite of the growth, Geater remains a family-held company – Scott Geater took over as president and majority owner in 1994 when Duane Geater retired – and remains committed to its core, community-focused values, Bitterman said.

“We’re involved with community service and giving back,” he said.

Along those lines, Geater Machining and Manufacturing is involved Hawkeye Community College in the Exploring Manufacturing Careers Consortium, or “EMC-squared,” a program to educate young people to manufacturing and career opportunities in high school. It is a training program that reaches down into the high schools to interest youth in manufacturing jobs.

Geater has hired “five or six” of its current employees from that program, Bitterman estimated.

Clayberg said Geater has been a dependable economic force in the region.

“It’s a company that has a pretty consistent workforce; I don’t think they have much turnover,” he said. “They have the same challenge of trying to find good workers, too. As they’re looking to expand, they’re a group that gives back to the community. Scott sits on the foundation board that’s looking to raise money for the new high school. There are employees that sit on the chamber of commerce board. They do a lot for band trips or school trips or Rotary.”

The company also listens to its employees, which is a key to retention, Bitterman said.

“The biggest thing is we have open communication and create an atmosphere that’s conducive to trust,” he said. “It’s a place where in our vision statement, we want to be our customers’ supplier of choice but internally we want to be an employer of choice.”

The company also emphasizes promoting from within, he said, and pointed to himself as an example.

“We also try to bring a balance of bringing new people with new ideas in,” he said.

On Saturday night, the company held a “casino night” for employees — one of a number of celebrations is has scheduled this year to mark its half-century in business. The program included a prime rib meal and a band.

“Once we get the new building up, we’re going to have an open house for customers and suppliers next fall,” Bitterman said. “In the afternoon, we’re going to invite all family members in and do a cookout and celebration of 50 years.”

Clayberg said the company has evolved to include the best ingredients of a small company and the necessary attributes of a global player.

“What’s neat about them is the things they make that go around the world,” he said.