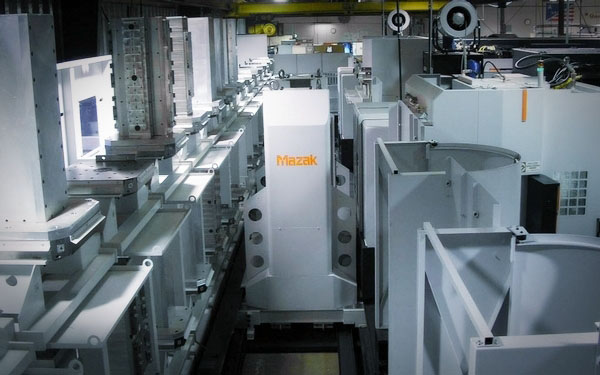 When Geater Machining and Manufacturing Co. (GMM; Independence, IA) began its search for a precision machining cell, it selected a highly automated Mazak machining cell to produce parts for electronic communication and aviation components and assemblies. Its objective was to integrate its business processes with flexible automation to enhance its competitive position for precision machining markets. “Our goal was to find and implement an automated cell that was truly capable of precision machining of multiple parts on multiple machines simultaneously—scheduling the job, starting and finishing it, and limiting the number of active jobs and WIP,” explains Joe Meier, GMM’s operations manager.

Founded in 1962, GMM had grown from its beginnings in founder Duane Geater’s garage into a custom manufacturer with about half of its business in precision machining and half in custom sheet metal fabrication. Today, the company occupies a 48,000-ft² (4459-m²) facility and employs more than 100, including a full engineering staff. GMM is ISO 9001:2000, AS9100:2004, Nadcap, and SEA certified. It is veteran-owned by ex-Marine Scott Geater, and is located in an SBA HUBZone.

GMM’s precision-machining requirements include production oders, short lead-time parts, and prototypes. Parts and assemblies include precision sheetmetal and machining components and parts for electronics and avionics, such as aerospace housings, communications parts, and chassis for computers, and assemblies used in the cockpits of commercial and defense aircraft.

GMM selected dual HCN 5000-II Machining Centers from Mazak Corp. (Florence, KY) with a 32-pallet, two-loadingstation Hi-Rise Palletech Manufacturing System. The two 500-mm (19.7″) HMCs feature 18,000-rpm spindles, 60 m/min (2362 ipm) rapids, fast tool change, full fourth-axis capability with Renishaw NC-4 laser, and two 330-tool hive tool. A rail-guided Mazak Palletech Flexible Manufacturing System with dual HCN 5000-II Machining Centers is at the heart of Geater Machining and Manufacturing Co.’s cell that completely integrates data from its business systems with the flexible machining process. Incorporated into the cell are a Brown and Sharpe Shop Floor 1 CMM, a Remstar material handling system, and a vibratory deburring station. Automated scheduling is provided by Scheduling Automated and Integrated Lines (SAIL) software from CMS Research Inc. (Oshkosh, WI), and cell engineering by CMS’s Manufacturing Simulation Tool (MAST) software. The need for a flexible scheduling software system was a no-brainer. Traditional control software imports orders without knowledge of capacity and doesn’t provide an expected completion date. SAIL differs from traditional control software by generating a realistic schedule based on capacity and due dates. Sail indicates available capacity, and when completion of an order can be expected, it monitors progress, and reschedules as needed to maintain on-time deliveries. CMS’ Mast software provided the engineering of manual or automated handling, tools, fixtures, and capacity and assembled cellular components (machines, tools, fixtures, part handling, robots, and operators) into an optimal configuration. “Flexible automated scheduling of a cell requires that there is actual allocation of orders by due date or priority. We’re not just machining parts one at a time and running the cell like stand-alone machines. It’s a big jump from running one job on one machine to running jobs simultaneously on multiple machines,” says Meier.

Parts machined in the cell are aluminum, measuring 12 ×12″ (305 × 305 mm). They typically start out as solid blocks of aluminum that involve complicated and intricate machining with as many as six parts fixtured on tombstones. “We’ve machined some parts with fins for cooling that were 0.020″ [0.51-mm] wide and about 0.5″ [12.7-mm] high. We had extra-high chip hoppers designed for the cell so that we can run untended over the weekend. We also incorporated Mazak’s proprietary Cyber Tool management system. Operators don’t have to worry about tool life. We set the tool life and before it expires, a message is sent to our tool crib. They go out and change the tool before it expires, so that we basically have zero rejects.” The Mazak Palletech Manufacturing System, which was installed in July 2009, is credited with a 20% increase in production and increasing GMM’s machining capacity by 15,000 hr annually to date. GMM runs two 10-hr shifts, five days a week. On the first shift, about 30 hr of one machine’s time is dedicated to prove out of new parts. They are getting a little more than 200 hr of machining time a week by allowing the machines to run untended for off-cycle work on weekends.  “Scrap parts have been virtually eliminated,” says Meier. He credits the repeatability of the machines and the fact that inspection has been integrated into the cell in such a way that parts coming off the machines can be inspected according to fixture and pallet. “If process tolerance starts to get into the yellow, but isn’t out of tolerance, operators can dial the process right back in based on this in-cell inspection.”

Including the Remstar material handling system in the cell as a way to organize WIP and raw material occurred to Meier while he was visiting Mazak’s Florence, KY, headquarters plant. There he saw the Remstar material handling system that Mazak uses to store, track, and retrieve 43,000 unique part numbers in its parts department using technology that integrated shuttle vertical lift modules (VLMs), software, conveyors, and stacker cranes. He asked why the same thing couldn’t be done with his cell. The answer, of course, was that it could. CMS Research supplied the necessary data link for the Remstar system. GMM had correctly anticipated and prepared for the data flows between the many computers that populate the shop. Either through CMS Research’s software or by careful attention to the interfaces between the many devices, data flows with the inspection, programming, and order processing departments, among others, were facilitated. For example, the CMM reports are automatically linked to the tracking systems and to the order, and all data are cross-referenced and linked together. Geater’s rules govern the operation of the cell. Orders are automatically imported into the SAIL software, updated every 15 minutes, and allocated into the daily schedule, and downloaded directly into the cell-control computer.

Each order is tracked and actual machine hours are automatically reported against the order. Material tracking is accomplished with the SAIL software using serial number tags for each part that include pallet, fixture, and part position in the fixture. The quality plan using path counting (including pallet, part, and machine combination) and the frequency of CMM inspections run by the operator have also contributed to eliminating scrap parts. The machine assignment plan assigns jobs with high hours to multiple machines and low-hour jobs to one of the machines. Geater uses a rule that any part with forecast machine hours greater than 400 hr per year must be proven to run on multiple machines. Smaller parts demands are dedicated to a single machine. Fixtures are assigned to pallets to balance pallet use and eliminate bottlenecks. GMM’s scheduling department uses a six-week forecast and reviews the capacity of the machine cell. Hours of operation and manpower levels are determined from this capacity study. Specific jobs with long cycle times are reserved to run only during untended machining periods.